Is the belatedly capped Deepwater Horizon well in the Gulf of Mexico leaking oil? A photo from 2010 indicates this may be so, I'm very sad to tell you.

Remember that happy day when I posted that the 'BP cap is stopping leak' circa July 15, 2010?

The headline then was that no more oil is leaking from the Deepwater Horizon well. Yes, Neptune is deeply involved in the whole BP oil fiasco and its cover-up since in Astrology nebulous Neptune rules oceans, oil, gas, leaks, fraud, deception, veils, illusions, delusions, cover-ups, dispersants and chemicals, poisons, drugs, smothering, and lies.

Now it's September 2011 and Scotland's North Sea has recently been breached by an oil leak with environmentalists demanding more answers from Royal Dutch Shell than they've received so far.

As you know, the propaganda going round is that Corporations Are People, Too--until the bagpiper is ready to be paid. Then they skip out on the bill and leave government (we-the-people) with as much of their tab as they can get away with.

Well, the little Red-banded wrasse you see below doesn't seem much impressed with 'royalty' acting badly no matter which flag they fly. He hints that human personages who can't get enough power and wealth need to get wise to their bad selves, back off, and take responsibility for their activities like all Oil Can Harrys end up doing if they criminalize society long enough--creeping about oppressing people and having their misguided way.

Okay, I'll hush about it. For now. And turn you over to Mr. Red-banded in a close-up from his Dreamyfish Art portrait, a botanical pencil rendering by yours truly but within his own imaginary scenario as a colorful backdrop in which to float about in his fondest dreams! 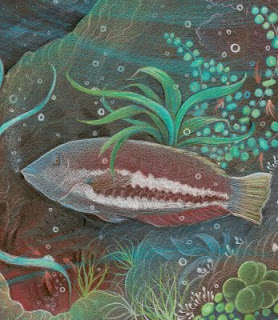 Hey! If you like the occasional fish drawing or Art on the cosmic side, you may wish to browse my Jude Cowell Art Shop @ Zazzle for Dreamyfish Art prints and posters (including the little fellow above), plus other art-decorated goodies such as iPad and iPhone covers waiting for you to check them out as you may!

Oh, and fyi: Stars Over Washington has been recently updated with videos and Political Astrology articles (written in English, not to fret) if you're interested. jc

come visit some time, id love to hear what you think of my artwork