Why Does This Species of Fish Migrate? BP Oil Spill in the news


Well, here's a Curious Fish Fact: 80% of a species of freshwater fish, the Common roach fish (Rutilus rutilus) migrates to nearby streams in order to keep from becoming a predator's dinner. Little smarties!

And while it's true that in the last several months I've had no time for drawing botanical fish portraits, fresh or salty, I am remiss in updating Dreamyfish Art due to a new member entering our family in 2012--yet I thought you might want to get the scoop on roach fish! Babies do have schedules of their own, don't they?

So here's a tidbit on the current courtroom drama in which the judge watchs former BP head Tony Hayward's testimony about BP's 2010 spoilage of our Gulf Coast.

Now here's the usual message of this blog brought to you by the Ornate butterfish you see pictured below: 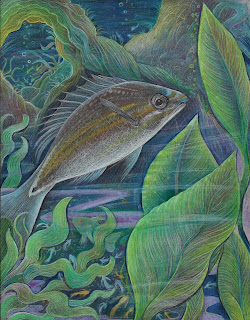