As you may have heard, Marine Science Professor Samantha Joye saw the bottom of the Gulf of Mexico with her own eyes and says it's still oily and has dead patches. Those elusive 'magic microbes' haven't finished the job.

Joye and her colleagues also say that certain predictions being circulated that 2012 will see the Gulf's miracle recuperation from the April 20, 2010 Deepwater Horizon oil blow-out are wrong - I say BP must be blowing something hazy along with their pie-in-the-sky notions and slights of hand.

Meanwhile, here in Athens, Georgia, home of the
University of Georgia (a land-grant and sea-grant insitution), we're proud of Professor Joye's excellent and careful work concerning the Gulf Oil 'spill', a plight caused by men against their fellow man, and we support her efforts to get to the bottom of the situation with honesty...and with science.

But I don't think Pink shrimp goby cares for the bad news at all: 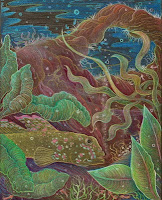