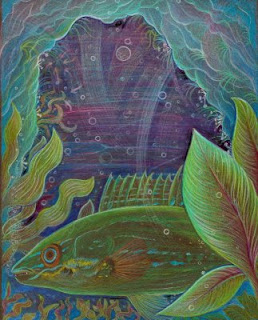 Oh look: Bridled weed whiting is peeking from the algae just in time for Feb 24's New Moon in Pisces, sign of the two fishes!

As you know, the mythology of Pisces relates to spirituality and mystery, and 'hiding in plain sight' is its talent through the sign's connection with nebulous Neptune.

Now astrologically, I use traditional rulers for signs which makes Jupiter ruler of Pisces, though I may refer to Neptune as co-ruler or a higher octave of Jupiter, aka the Hierophant in Tarot.

Idealistic, ideological Jupiter relates to traditional religion while Neptune is more of the 'spiritual' component in our psyches...Neptune is the divine source (and also ruler of the seas in which little fishies swim - it turns up in our dreams as the ocean = the unconscious.)

Astrologically, Neptune also stands in for the masses and represents the collective unconscious, although psychological Pluto has a say as well.

So with Tuesday's New Moon, we may expect a new phase of such spiritual, mysterious, or creative issues, if we so desire. But the weekend (this is being typed at 1:22 pm est on Friday 2.20.09) is the dark of the Moon, the Balsamic phase, 3 days during which the I Ching cautions us to lay low, dream, rest, and perhaps create...things which Pisces adores without any prompting at all!

You may wish to view the horoscope of Feb 24's New Moon 6Pis35 with details - including midpoint pictures from the chart which is set for the Capitol Building, Washington, DC (est.)

And the New Moon's Sabian Symbol for '7 Pisces' is to be found at Stars Over Washington for your evolutionary consideration.

So Happy New Moon, Everyone, and treat a fish to lunch!
Posted by Jude Cowell at 8:39 AM