On Saturday, Feb 20, 2010, my family and I attended Planet Shark Blogger Day at Atlanta's Georgia Aquarium with a complimentary ticket I received just for being a blogger!

Cameras snapped (though not in the Planet Shark exhibit - photos are not allowed - never annoy sharks!) and charming formally-dressed African Penguins greeted us as we entered the main area, with their good looks fully on display (myself was quite dishevelled, but never mind.)

Attending with a four-year-old was a real treat as she stooped down to go behind some of the fish tanks with the other kids to snag herself a different perspective. Viewing fishes and sharks swimming in tanks over our heads was quite marvelous, although if I had to make a suggestion for the Aquarium it would be for cleaner glass on display cases so that photos would turn out clearer.

An Emerald Tree boa, Corallus caninus, curled around a tropical tree limb in one exhibit that held so much greenery it made me want to climb in (if only the boa would vamoose!) for jungle scenery is my idea of earth's luscious beauty worth curling up in.

Another exhibit sported a very long alligator that seemed to swim by to pose for his daily camera ops - he's obviously an old hand at meeting the public. Spanish Moss hanging from the trees made a lovely accompaniment for the alligator's prehistoric countenance along with his tank mate, a massive-sized snapping turtle lurking in a nearby cove...no young whippersnapper there.

The Aquarium's Electric Fish exhibit was very popular, and its eels, Electrophorus electricus, and Catfish, Malapterurus electricus, stole the show - yet the Coldwater Quest display was one of my favorites because of its Kelp Forest tank (Kelp grows about a foot a day - kind of like a four-year-old!) and I adored the lovely Sea Anemones and Urchins. But the Crustaceans? Not so much, although they are a curiosity. (How people manage to consume them and like it is way beyond me...I prefer my fish dinners to have fins, thanks very much.)

And as you may expect, the played-out otters all asleep and piled upon one another, were favorites, too, and our cat-loving young lady fell in love with the furry fellows. Yet since I tend to draw botanical portraits of tropical fish from Southern Australia, you may imagine that the Aquarium's Rockfishes and the Tropical Diver exhibit - The Coral Kingdom - hit big home runs with this artist.

And what would any Aquarium be without orange and white Clown fish, model for Pixar's character in the popular Finding Nemo film? (One of my personal favorites, and yes, I've owned a copy since its release...just keep swimming...)

Plus, 'common' or not, who doesn't love an amazing color-changing
Common cuttlefish, Sepia officinalis, to go along with your Atlantic - or Pacific - sea nettles? But always stay on their good side if you can figure out which side that is!

Well, thanks for browsing the Georgia Aquarium with me, and do make plans for a visit if you're ever in the Atlanta, GA area, okay?

Now here's a handy $2-off coupon which you may wish to print out for Planet Shark! 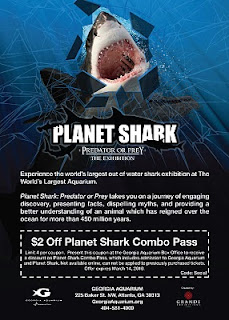 Here's a drawing of a clump of Giant Red Kelp that I rendered some time ago for you in case you missed it. jc
Posted by Jude Cowell at 11:20 AM

Hi , fren ! Seems like you enjoyed yourself . Thanks for sharing your experience !